April 23, 2020
No comments yet
Additions to Our Collection, Director's Blog, News, Richard B. Coe

In this post, the second in a series centered around Dixie Art Colony participant Richard Blauvelt Coe we will take a look at some of Coe's illustrations. In 1968, a children's book titled "Sam A Goat" was published by Astor-Honor, Inc., New York, NY. The narrative, written by Bayard Dominick, a senior partner in the investment banking firm of Dominick and Dickerman, tells a story about a Toggenburg goat. Dominick was also a former Governor of the New York Stock Exchange.

This book was illustrated by nonother than DIXIE ART COLONY ARTIST RICHARD COE. Coe was one of several DAC artists, including J. Kelly Fitzpatrick and Mildred Nungester Wolfe, that we know illustrated books. We have incorporated "Sam A Goat" into our growing DAC FOUNDATION RESOURCE LIBRARY along with books illustrated by other DAC artists.

We first learned about this book while reading and cataloging newspaper clippings about Coe, where we discovered an excerpt from "The Selma Times," dated March 24, 1969. The article contains snippets about new books at Selma's Carnegie Library. (A total of 2,509 Carnegie libraries were built by Andrew Carnegie between 1883 and 1929 across the United States. The Carnegie Libray System included 14 public libraries built in the state of Alabama using funds awarded by the Carnegie Corporation of New York, NY.) 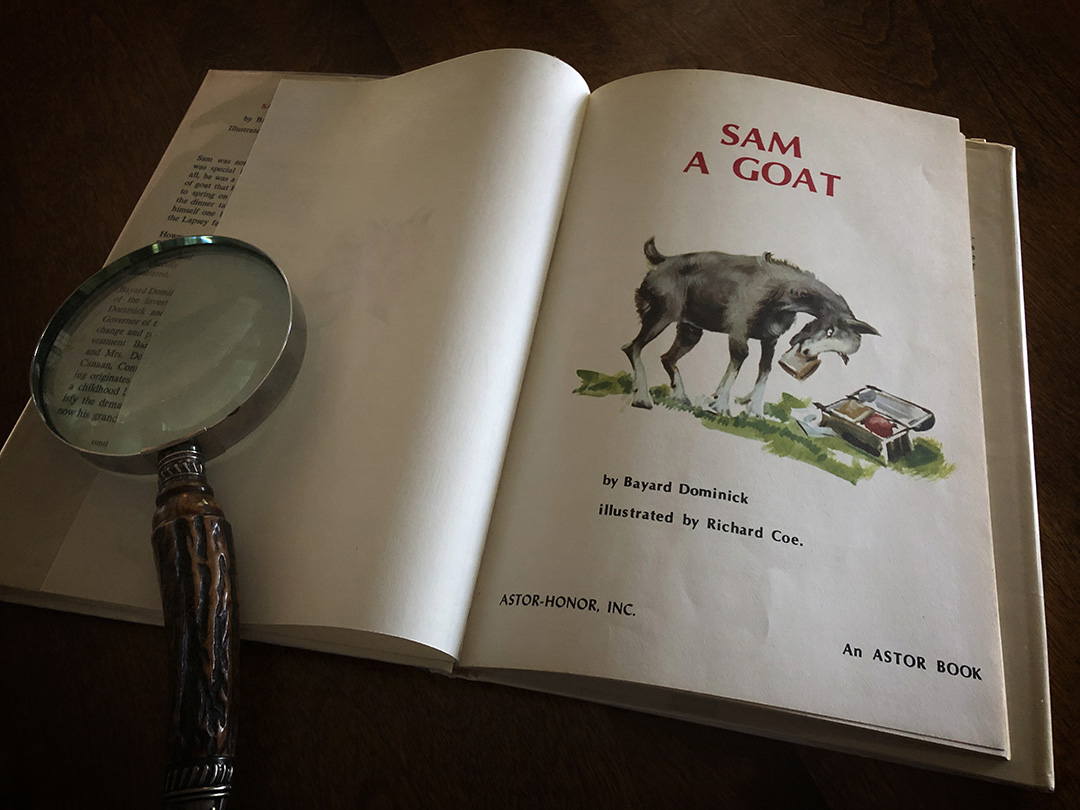 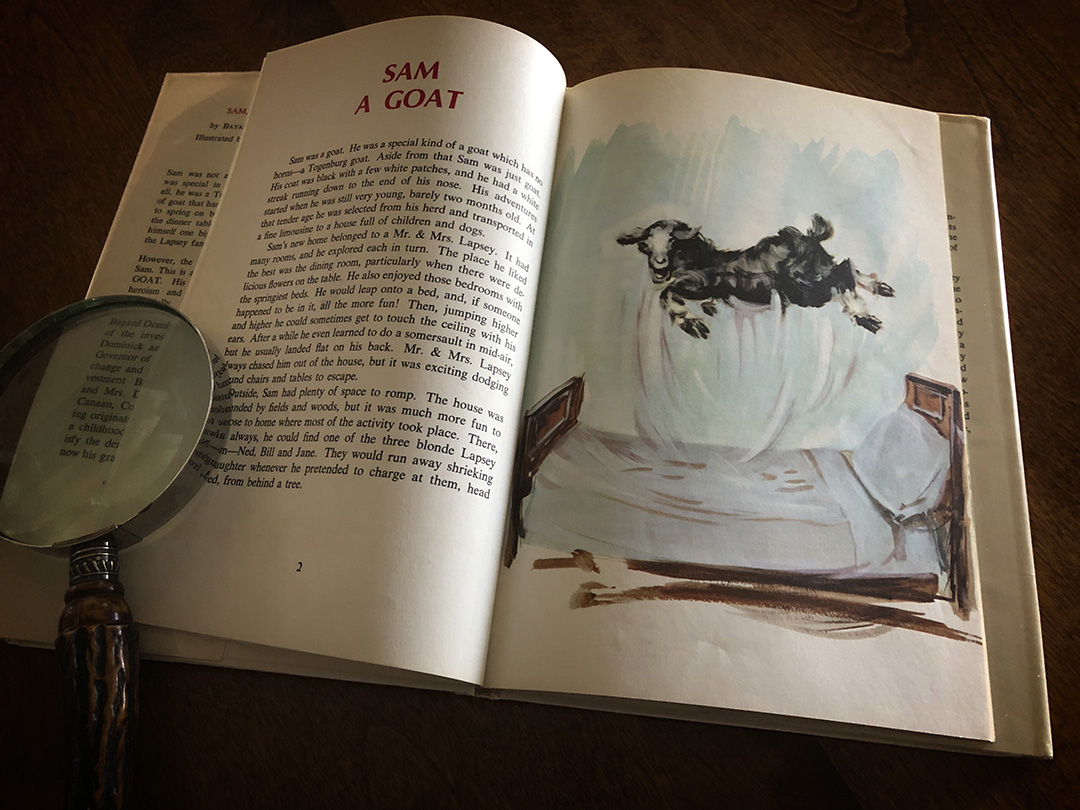 As the title suggests, the main character in the book is a goat. As we all know, goats tend to eat everything in sight. The narrative begins with Sam's faux pas in eating a rhododendron. "As he was soon to learn, rhododendron is not good for goats. As goats go, it is a deadly poison." After Sam's remarkable recovery, the story continues with an incident involving Sam, Mr. Gabe, and a gasoline-powered lawnmower. While riding on the lawn mover, Mr. Gabe suffers a heart attack, and Sam tries to signal for help. 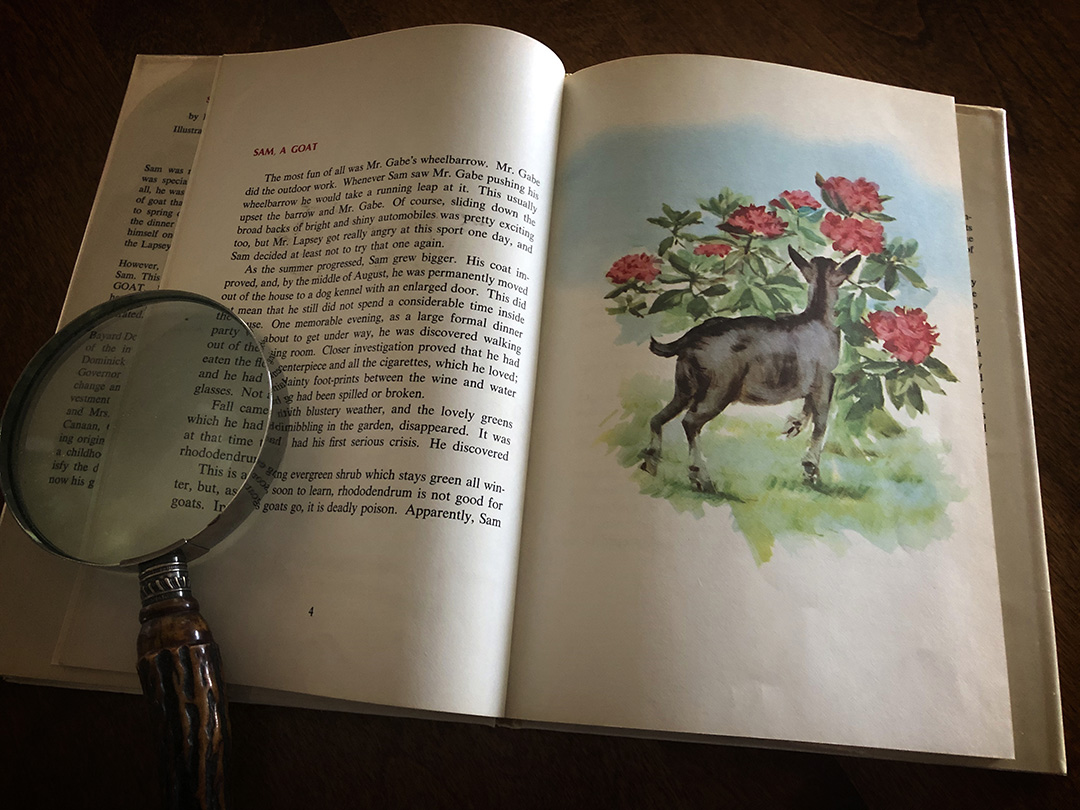 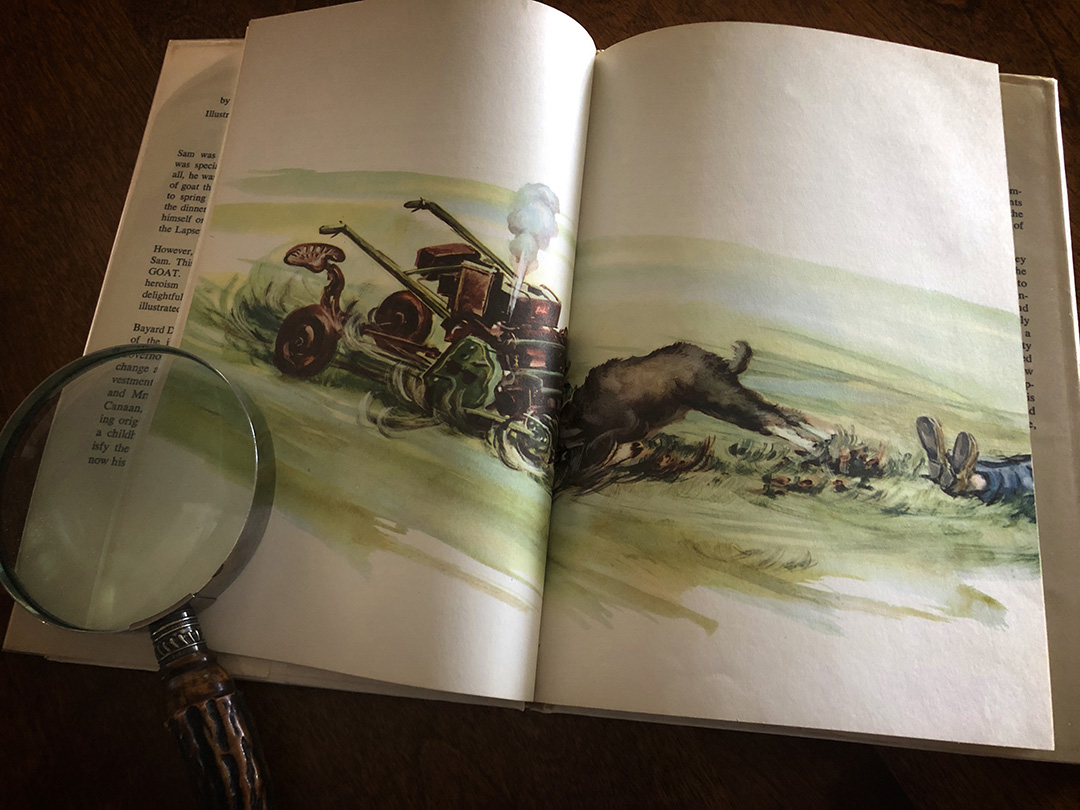 While recovering in the hospital from the heart attach, Mr. Gabe was told by the doctor that Sam had saved his life. Mr. Gabe then demanded that Sam be brought to see him. The hospital staff agreed that if Sam appeared, they would look the other way. When Mr. Gabe's family brought Sam into the hospital, they covered him with a sheet, and no one said a word. 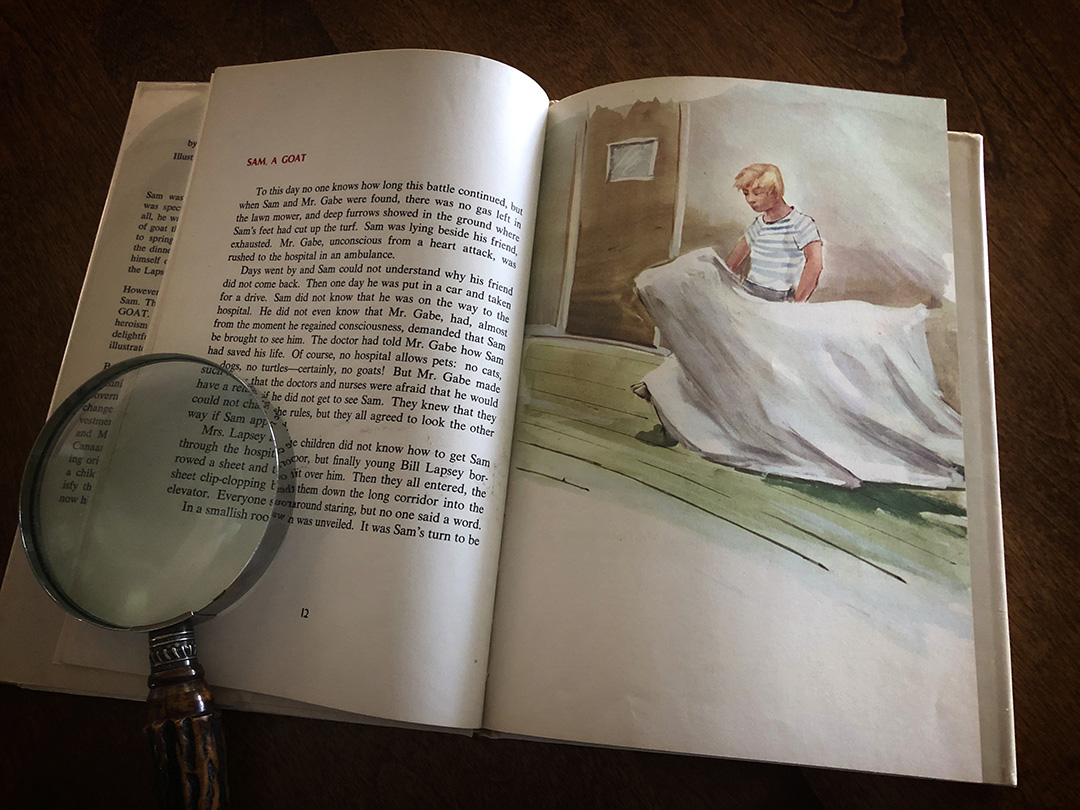 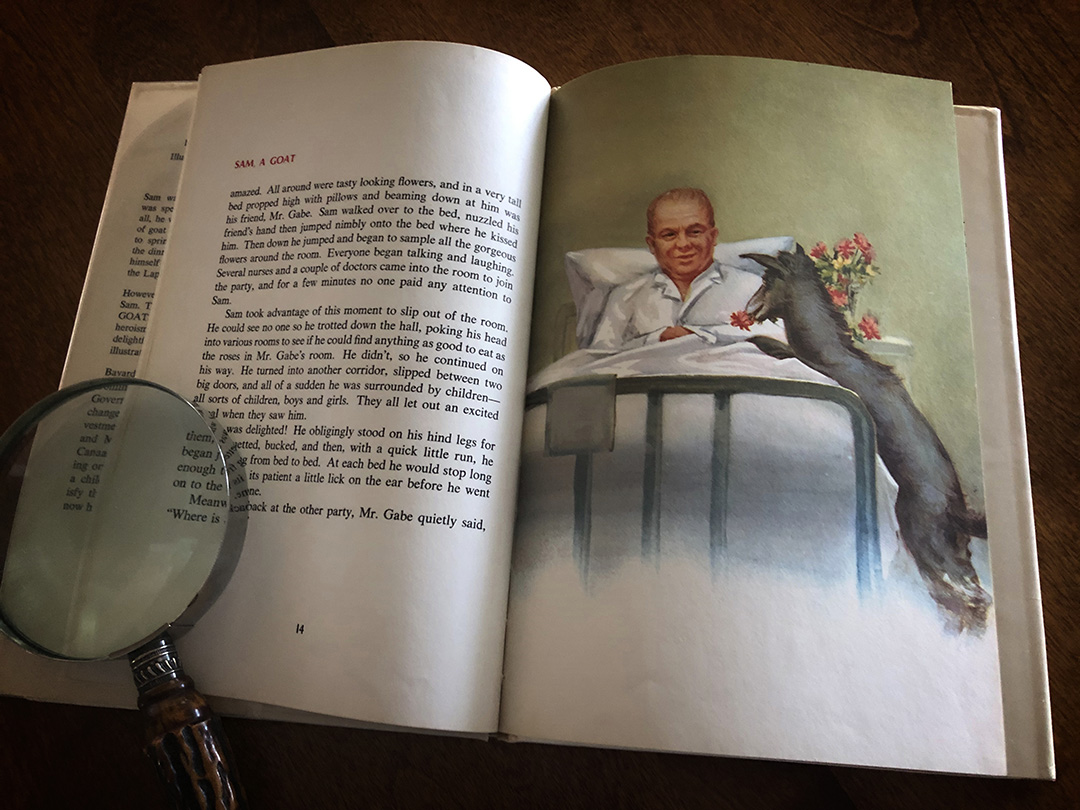 After entering Mr. Gabe's hospital room, it wasn't long before Sam started tasting a vase of flowers and then jumped in bed with Mr. Gabe. After several nurses and a couple of doctors joined the party, Sam snuck out of the room and made his way into a children's ward, where he quickly bonds with the boys and girls. Sam was so popular at the hospital that day that the children's ward was later named Sam's Ward. 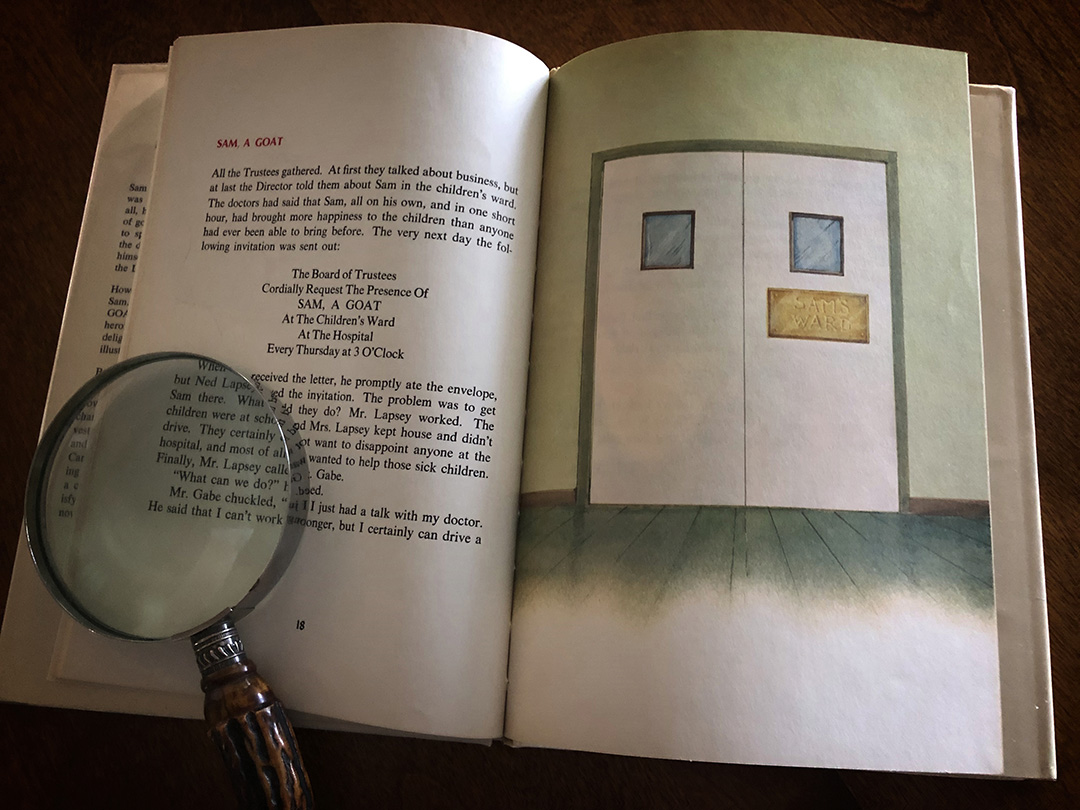 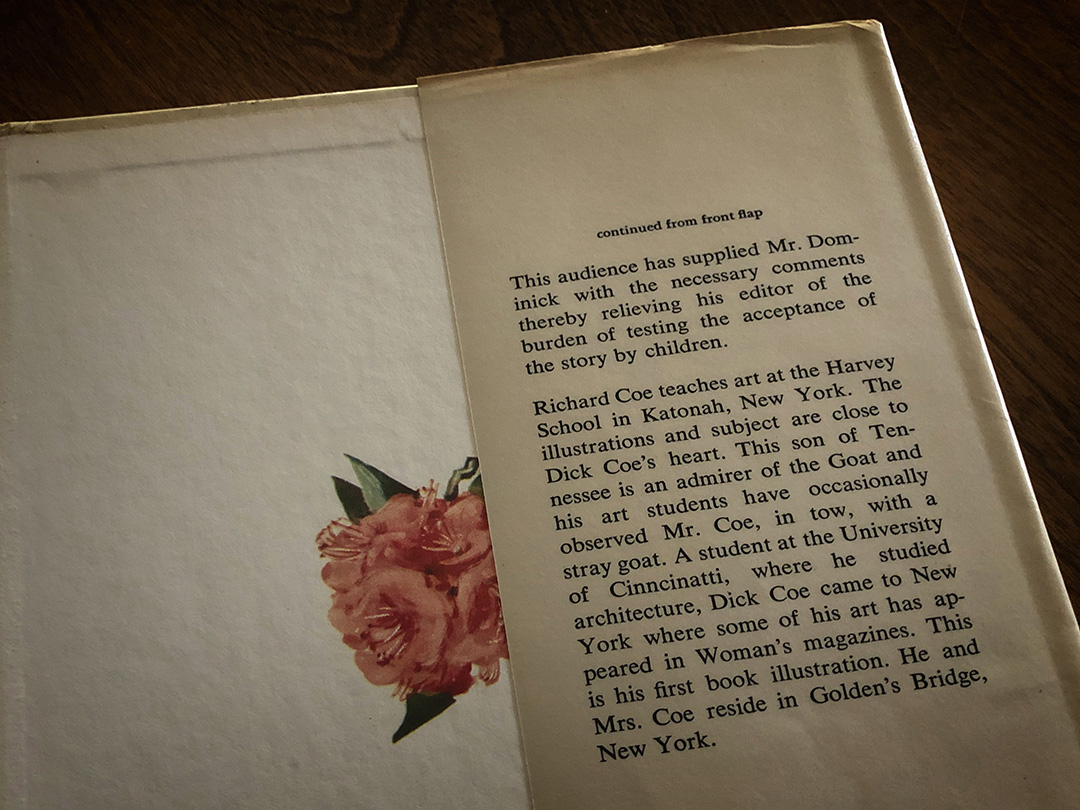 NEXT, in this series, we will share more about Coe's life and career, additional newspaper clippings from the DAC Foundation Archives, and photographs of other works by Coe included in the Dixie Art Colony Foundation Collection.

Your ticket for the: The Elusive Mr. Richard B. Coe: Part Two