It is with a heavy heart that we announce the passing of our dear friend and fellow Dixie Art Colony enthusiast Norma LaMae Forbes. Norma passed away peacefully in her sleep in Asheville, North Carolina on Saturday, October 27, 2018, after living 99 years, 7 months and 23 days.

I had the privilege of spending the day in Asheville with Norma in February of 2017. That day was a day I will always remember fondly. Norma was a gracious southern hostess and still full of life and wonder. My traveling companion for the trip was Kim McRae, the daughter of Norma’s close friend and fellow art colonist Jane McRae.

The day of our visit, Kim and I arrived at Norma’s assisted living facility around 9:00 in morning. We started out by asking her to share some of the highlights of her fascinating life. She began by sharing a touching story about her birth in a Birmingham, Alabama hospital on March 4, 1919. She told us the nurses nicknamed her “Fire-Baby.” With a huge smile on her face, she chuckled a bit, then went on to explain that the day she was born, the hospital was bustling with excitement and activity, not over her birth, but the fact that the hospital caught on fire that day. She went on to explain that on that cold March day due to the fire, there was no electricity or heat in the building. She continued by sharing a story her father told her about how on the first day of her life, he unbuttoned his shirt and held her close to his chest to keep her warm and safe. 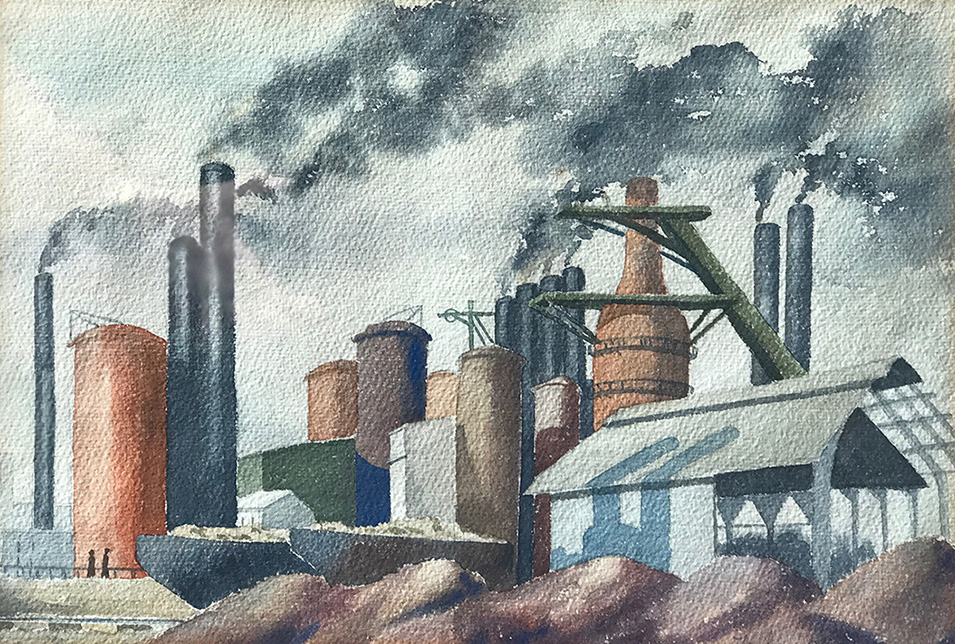 After graduating from high school, Norma attended Parsons School of Design in New York City where she learned to draw and paint while she studied fashion design. Her memory was a bit sketchy about attending the 1939 World’s Fair in New York where six of the Dixie Art Colonists, including her dear friend Kelly Fitzpatrick, exhibited their work. However, she was able to share a few memories about the excitement surrounding the historic event. One exhibit that delighted her was the cow exhibit with Borden Dairy Company’s “Elsie the Cow.”

After her stint at Parsons School of Design, Norma decided she didn’t want to work as a fashion designer after all and returned to Birmingham where she went to work for Southern Bell as a draftsmen and later an engineer. (I thought to myself, wow, that must have been very unusual for a woman to hold a job in the early 1940s drawing and designing telephone cable diagrams.) During her years at the telephone company she continued her artistic endeavors by studying drawing and painting with Dixie Art Colony co-founder Kelly Fitzpatrick. She reminisced about visiting Wetumpka on numerous occasions and had vague memories of visiting the Dixie Art Colony at Nobles Ferry. She did not attend any of the formal sessions at the Elmore County colony, however she did participate in some of the formal sessions of the DAC Bayou Painters’ spin-off on Alabama’s gulf coast.

Norma shared very clear memories of time spent at the Bayou Colony with her friends and instructors Kelly Fitzpatrick, Carlos Alpha “Shiney” Moon, and Genevieve Southerland. She spoke with great passion and delight about how much fun they had and the wonderful food at the local restaurants including Mary’s Place where the colonists often had meals and displayed their artwork. She told us that one-day the group was out painting at a lagoon when a boat entered the scene and started removing Spanish moss form the trees they were painting. When asked why they were taking the Spanish moss they replied, to stuff mattresses. Norma laughingly proclaimed, “While we were painting the scene, they were pulling our scenery down.”

After visiting with Norma for around three hours we checked her out of the assisted living facility and took her to downtown Asheville for lunch. We where amazed at how sharp her memory was and how well she could maneuver while only using a walking cane. During lunch we offered to take her to the nearby East Fork Pottery gallery featuring the work of Alex Matisse, the great-grandson of European artist Henri Matisse. She was delighted by the invitation and enjoyed the gallery so much that we then offered to take her to the Folk Art Center located on the Blue Ridge Parkway just outside of Asheville. While at the Folk Art Center, her energy and enthusiasm seemed to outlast ours.

After taking Norma home, we sat down with her again to shoot some video footage of her sharing more of her memories about Kelly Fitzpatrick. She started out sharing stories that Fitzpatrick had shared with her about his experience during World War I and how that intense experience had forever changed the course of his life. Norma stated, “Kelly had gotten a pass to visit Paris, but told his friends that he could not go because he didn’t have any clean clothes to wear. In turn, his fellow soldiers began to say things like ‘I have a clean shirt you can wear.’ ‘I have a clean pair socks you can wear.’ I have some clean underwear.’ So through a group effort, his friends put together a clean set of clothes and sent him off to Paris. Of course he went to the Louvre where he saw the Mona Lisa. While the museum guide was telling him about the Mona Lisa, Kelly thought to himself, ‘Fella you don’t know much about the Mona Lisa, I understand her and she winked at me as though she approved of what I had said, not of what you said.’”

As many of you know, while serving in WWI Fitzpatrick was severely wounded during the Aisne-Marne Offensive. During this battle most of his unit was killed. Fitzpatrick received severe shrapnel wounds on his face, neck and chest. In closeup photographs of him taken after 1918, the deep battle scars on his face are clearly visible. According to Norma, he also carried with him some deep emotional scars that he only shared with his close friends. She told us, “After Kelly returned home, he had to make sure that the curtains or blinds on the windows in his bedroom were closed at night. Because if the moonlight suddenly shined brightly through the window it would startle him so badly that he would start screaming. The flash of light reminded him of the dreaded flash from the large German canon called Big Bertha.”

Norma continued by explaining Fitzpatrick’s newfound philosophy. “After Kelly returned home he made a vow that from that point forward, he would no longer concern himself with material things and he was only going to do the things loved, which were painting and teaching others.” (Oh…I forgot to mention, she like so many others lamented about how much everyone loved Kelly!) Although I only spent only one day with this amazing lady, I feel certain that Norma’s friends and family are now saying the same thing about her.

Norma LaMae Forbes will be deeply missed by many, but she will live on in our thoughts and in the archives of the Dixie Art Colony Foundation for generations to come.

Anyone having artwork, photographs or other information or stories regarding Norma is encouraged to contact Mark Harris at 334-513-1086 or by email at info@DixieArtColony.org.

Your ticket for the: Remembering Norma LaMae Forbes