Wartime And The Dixie Art Colony 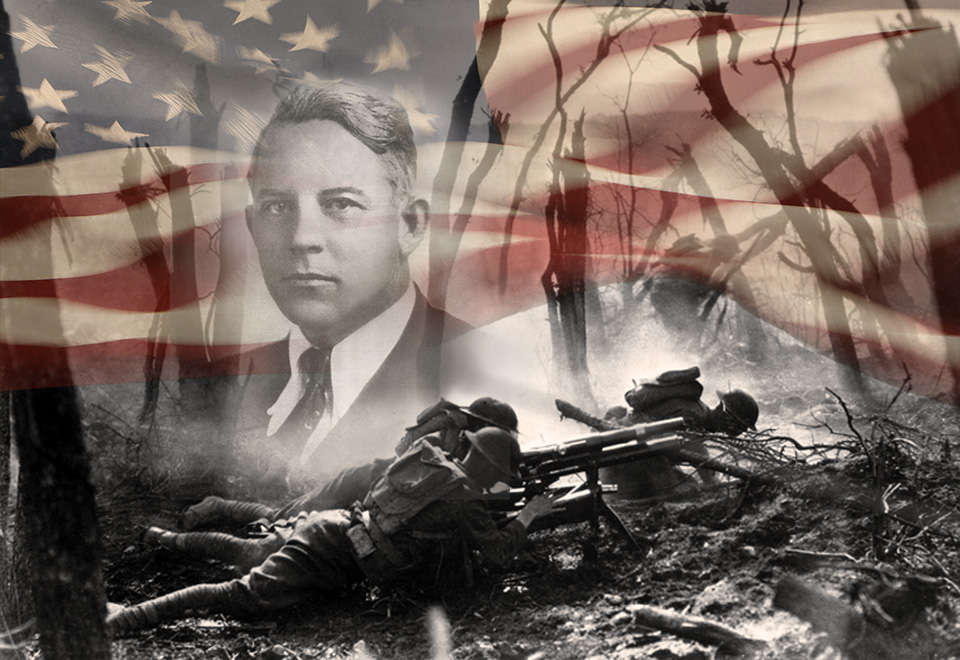 Fitzpatrick received the “Presidential Wound Certificate.” (What is today the “Purple Heart”)

In preparation for the “100th Anniversary of Armistice Day,” now called Veterans Day in the United States, we felt it appropriate to share some information about how World War I changed the life of Dixie Art Colony co-founder John Kelly Fitzpatrick and how we believe his experiences during WWI lead him to found of one of the deep South’s first art colonies.

While the Dixie Art Colony did not begin until 1933, its mere existence can be at least partially attributed to DAC co-founder John Kelly Fitzpatrick’s wartime experiences. Fitzpatrick served our country on the battlefield in three major offensives during WWI, the Aisne-Marne Offensive, Saint Mihiel Offensive, and Muse Argonne Ghent Offensive. While participating in the Aisne-Marne Offensive on July 19, 1918, Fitzpatrick and his unit came upon a German machine gun nest. During this confrontation, almost his entire unit was killed. Fitzpatrick, one of the few survivors, suffered severe shrapnel wounds to his face, neck, and chest. After this battle he was heralded as a hero and awarded the “Presidential Wound Certificate,” what is today known as the “Purple Heart” medal.

According to Fitzpatrick’s close friend and fellow artist Norma Forbes, a native of Birmingham, this experience forever changed Fitzpatrick’s life. Forbes a spry 99-year-old, who will be 100 years old on March 4, 2019, told us that Fitzpatrick’s combat experience colored his outlook profoundly, and that he told her that his physical suffering caused him to lose interest in the material world and focus instead on the beautiful and spiritual aspects of life. She quoted Fitzpatrick as saying: “From this point forward I am going to focus my efforts on doing the things I love and enjoy, which is painting and teaching.”

Forbes also shared a story about Fitzpatrick’s wartime trip to Paris, France. “Kelly also told me that he got a pass to go to Paris and he said, ‘I can’t go to Paris. I don’t have any clean clothes and his friends began to say, Kelly I’ve got a clean shirt, I’ve got some clean underwear, I’ve got some clean socks.’ So his friends dressed him in their clothes and sent him off to Paris.”

Forbes also went on tell us: “After Kelly came home, he had to keep the curtains drawn at night, because if the moon suddenly shined in his room he would think that it was ‘Big Bertha,’ the large cannon that the Germans used. The flash of light would cause him to wake up screaming because he had such dread and fear of that gun.”

After Fitzpatrick’s honorable discharge on August 6, 1919, little is known about his specific activities for the next several years, except that he returned to his home in Wetumpka and continued to paint. It wasn’t until the early 1930s that he began to emerge as a major public figure in the Southern art community.

Join the DAC Foundation on Sunday, November 11, 2018, at Trinity Episcopal Church for the 10th Annual Elmore County Tribute to Veterans dedicated to all that served in World War I, including Dixie Art Colony co-founder John Kelly Fitzpatrick.

The “Gallery of Honor” exhibit, which will include 10 oversized storyboards about the history of Veterans Day and Kelly Fitzpatrick’s service in World War I, will open at 4:00 pm. The exhibit will also include a new ten-minute video about the history of Veterans Day and information about DAC artist Sgt. Arthur Walter Stewart, II and his service in WWII. Sgt. Stewart worked as an Army artist during his service.  The DAC Foundation display will also include documents from the DAC Archives explaining how rationing and other aspects of WWII affected the colony.

The concert will begin at 6:30 pm. Guests can also view the exhibit at the reception which will follow the concert. Trinity Episcopal Church is located across from McDonalds at 5375 US Highway 231 in Wetumpka, Alabama.

To learn about this event, follow this link: ELMORE COUNTY'S 1OTH ANNUAL TRIBUTE TO VETERANS

Anyone having additional information about Fitzpatrick's combat service or the existence of artwork created by Fitzpatrick during WWI is encouraged to contact the DAC Foundation: info@DixieArtColony.org

Your ticket for the: Wartime And The Dixie Art Colony

Wartime And The Dixie Art Colony