As we mentioned in an earlier post, during this time of social distancing, we will utilize technology to continue the pursuit of our mission. This post includes images and information gathered in preparation for our March 28, 2020 event planned for JASMINE HILL GARDENS & OUTDOOR MUSEUM.

While combing through newspaper clippings, we found numerous articles about Jasmine Hill Gardens. Many of them mention Ben Fitzpatrick’s half-first-cousin Kelly Fitzpatrick and the Dixie Art Colony.

Today we are sharing two of the articles. The first was written by Judge Walter B. Jones, a close friend of Kelly Fitzpatrick and Ben and Mary Fitzpatrick. The second article, from “The Wetumpka Herald,” describes a feature article that appeared in the December 1931 issue of “The National Geographic Magazine” titled “Smoke Over Alabama.”

We hope you enjoy this snippet from the DAC Foundation Archives. WE ALWAYS STRIVE TO PRODUCE ORIGINAL AND RELEVANT CONTENT. 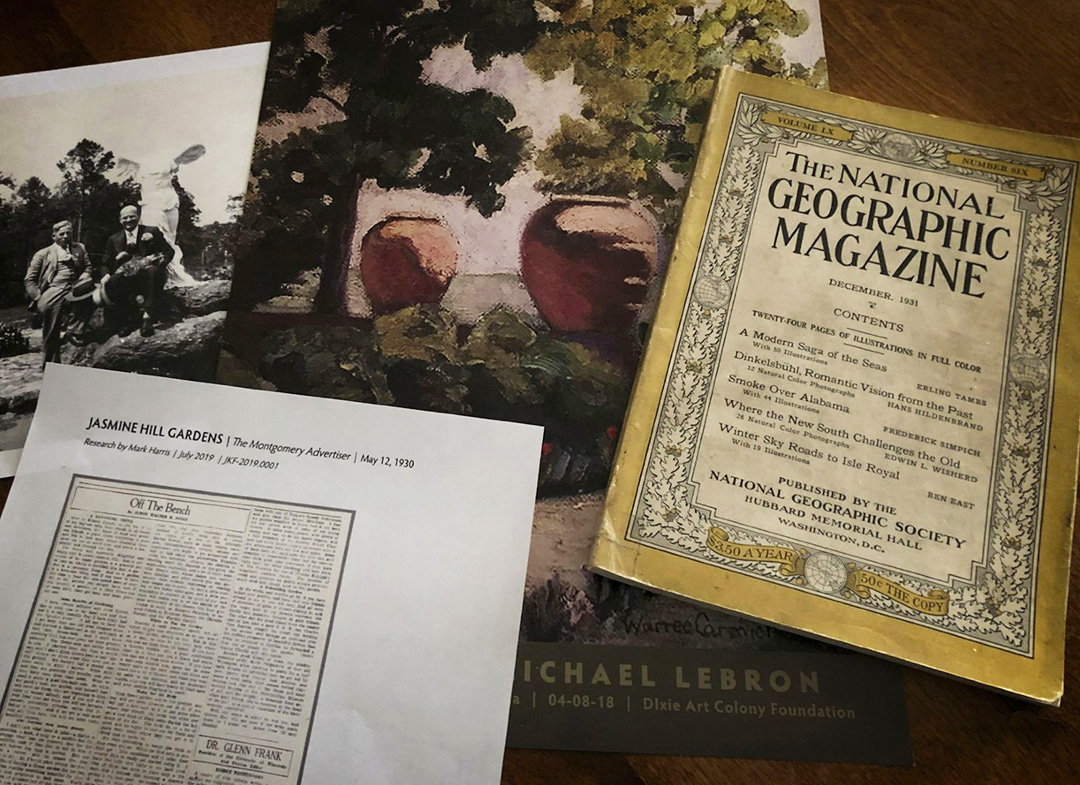 Shown in this image is an oil of Jasmine Hill Gardens by Warree C. LeBron from the collection of our friend and fellow collector of Dixie Art Colony related art, John Peter Crook McCall. 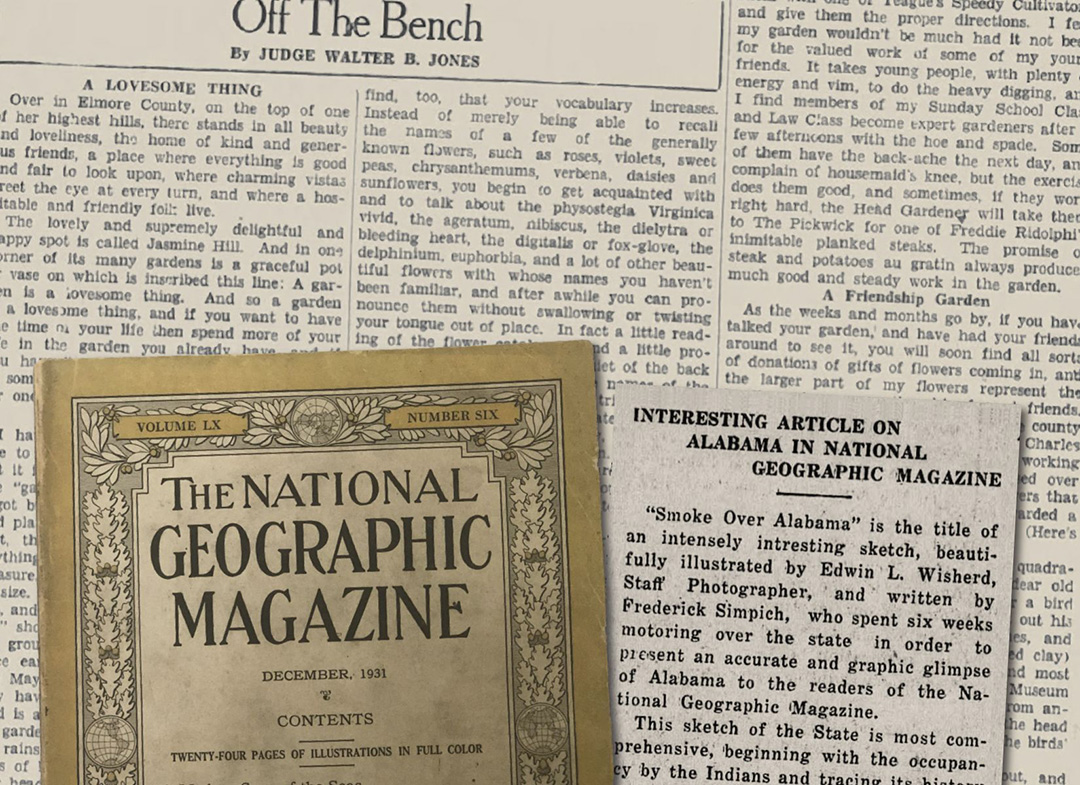 Shown is Judge Walter B. Jones's newspaper column "Off The Bench," published in the May 12, 1930 issue of "The Montgomery Advertiser." In this article, Judge Jones' affection for Jasmine Hill Gardens, and all things Fitzpatrick is evident.

Jones wrote:
"Another good friend of mine, the quadragenarian artist, Kelly Fitzpatrick, of dear old Wetumpka, after listening to plans for a birdbath, became so the interested that he got out his pots, paints, and brushes, and made a terra cotta (that means cooked clay) dolphin. The dolphin looks like one of the finest and most ancient bronzes of the Metropolitan Museum of Art, and the dolphin, a donation from another good friend, sits in concrete at the head of the pool as a sort of chairman of the birds' welcome committee."

At first, "The Wetumpka Herald' is very complimentary when reviewing the article, but later the tone changes. "Now we have a bit of 'deploring' to do, and that is that Wetumpka was not given more recognition. In view of the fact that one of the most beautiful illustrations is one of the Fitzpatrick estate at Jasmine Hill only a few miles from our city. We naturally regret that it was described as 'One of the State Capitol's Finest Estates.' However, the article is fine, and any reader interested in Alabama will find it well worth their time."

Shown in this photograph is Dixie Art Colony co-founder Kelly Fitzpatrick and his friend Judge Walter B. Jones at Jasmine Hill Gardens. (Notice the large cat in the lap of Judge Jones.)  Thank you to our friends at the BIRMINGHAM MUSEUM OF ART for sharing this photograph with the DAC Foundation.

Jones wrote about Jasmine Hill:
“Over in Elmore County, on top of one of her highest hills, there stands in all beauty and loveliness, the home of kind and generous friends, a place where everything is good and fair to look upon, where charmings vistas greet the eye at every turn, and where a hospitable and friendly folk live.” 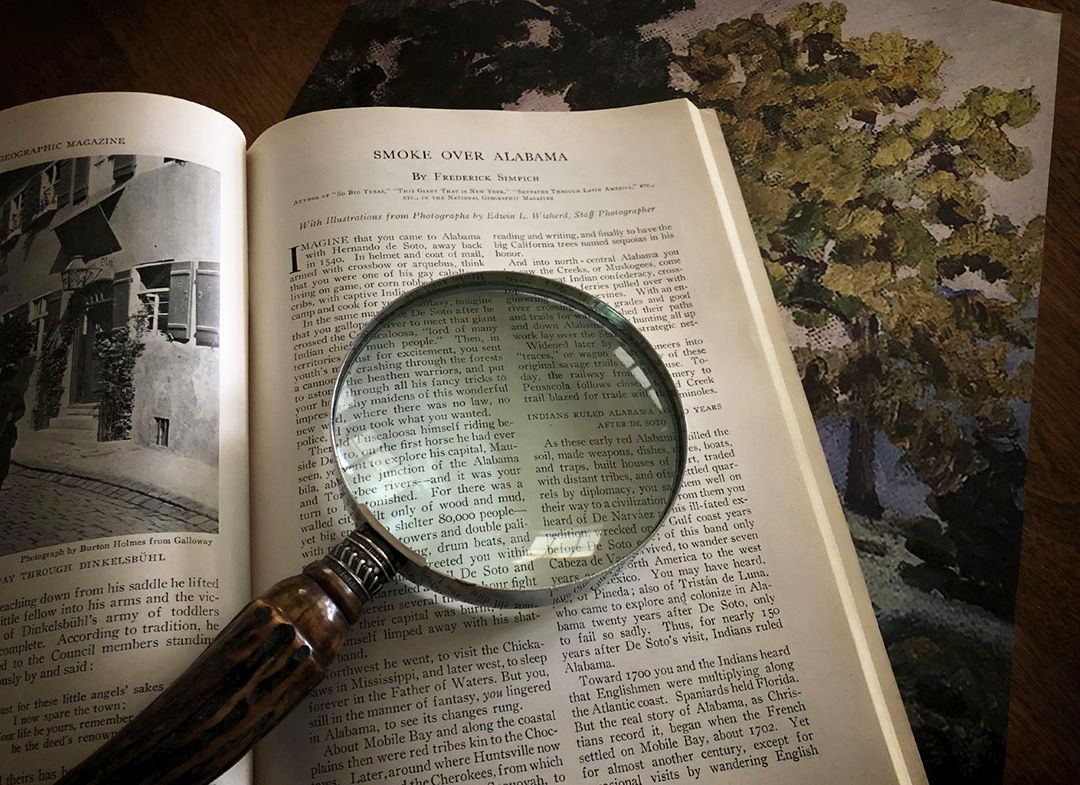 Shown is page one of the article titled “Smoke Over Alabama” form the December 1930 issue of “The National Geographic Magazine.”

The robust 55-PAGE article, written by Frederick Simpich with photographs by Edwin L. Wisherd, paints a beautiful and romantic sketch of the state of Alabama.  In preparation for the article, Simpich spent six weeks traveling through Alabama. The essay starts with the occupancy of the Native Americans and traces the state’s history through the year 1931. 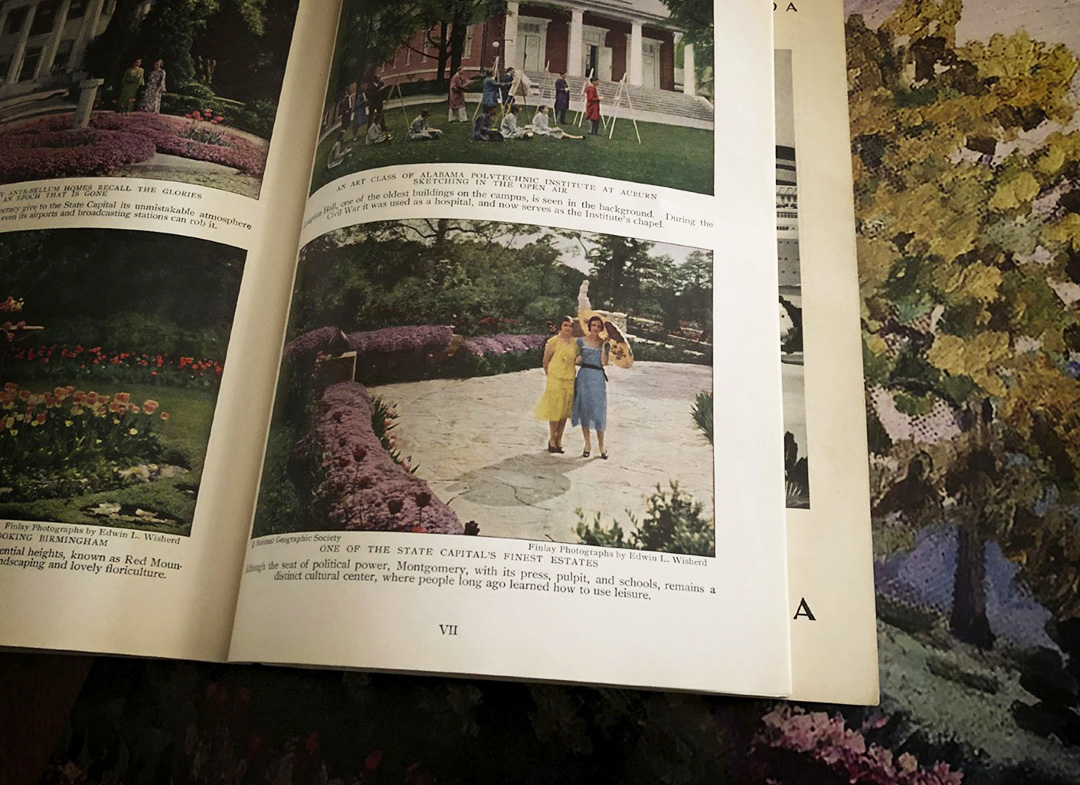 Shown in this photograph in the lower right is a picture of Jasmine Hill Gardens.

The “Smoke Over Alabama” article includes a large selection of photographs from throughout the state.

CLICK THIS LINK to read the entire article form May 12, 1930, issue of The Montgomery Adversiser.

CLICK THIS LINK to read the entire article form December 10, 1931, issue of The Wetumpka Herald.

Your ticket for the: From the DAC Archives: Jasmine Hill Gardens