Dixie Art Colony Foundation > Blog > Additions to Our Collection > Reconstructing and preserving the past, one piece at a time.

Reconstructing and preserving the past, one piece at a time.

August 17, 2019
No comments yet
Additions to Our Collection, Director's Blog, News

Sometimes reconstructing the past can be like constructing a jigsaw puzzle. As the Dixie Art Colony Foundation’s digital and paper archives continue to grow by leaps and bounds, we remain resolute in our quest to preserve this important part of our history. 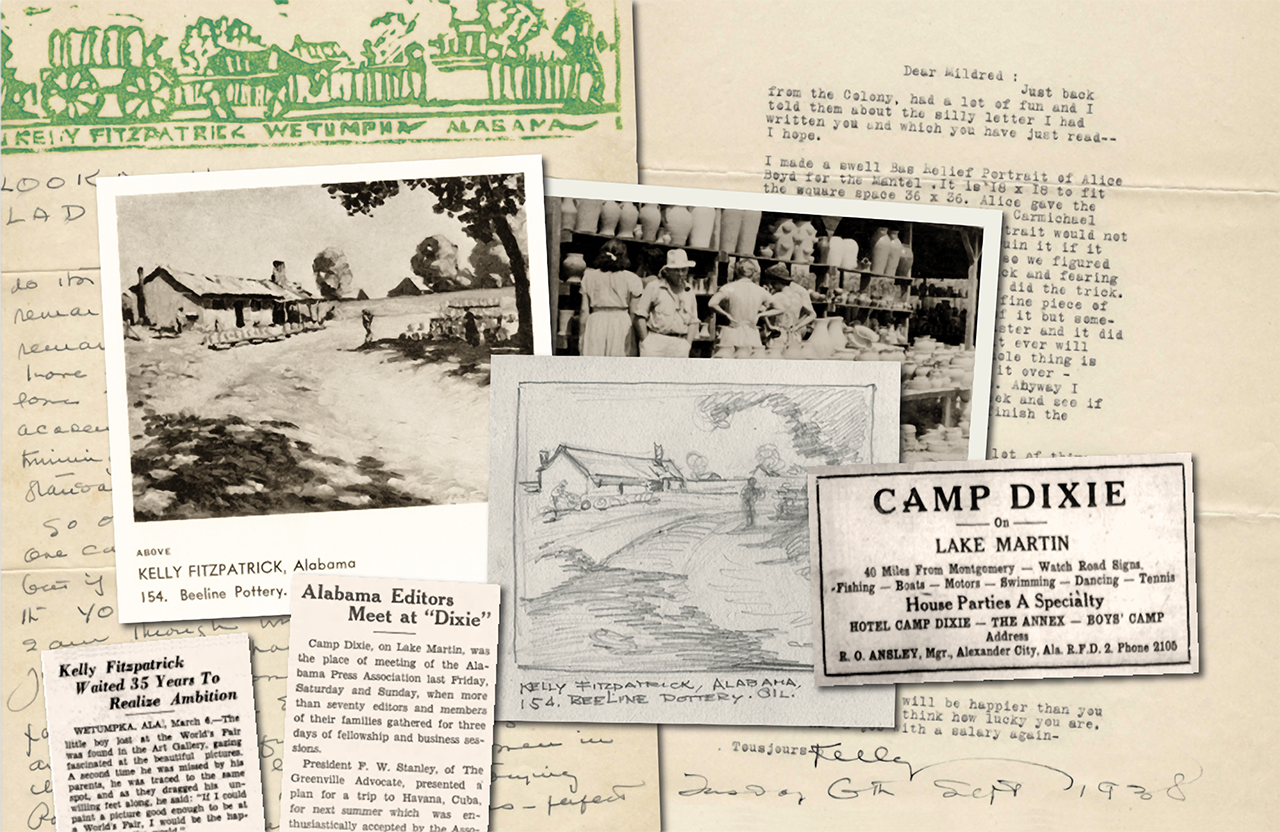 This collage includes some of our recently acquired letters and newspaper clippings. Also shown is our sketch of Fitzpatrick's 1939 entry in the 1939 World's Fair in New York City.

Since January 2019, we have added more than 350 ADDITIONAL Dixie Art Colony related newspaper clippings to our DAC Foundation archives. Contained within these clippings, WE FOUND INFORMATION ABOUT SEVERAL MYSTERIES WE HAVE BEEN WORKING TO SOLVE. Some of the information we found offered new details about many of the Dixie Art Colony Plein air painting sites. Examples include Beeline Pottery, Camp Dixie Lake Martin, and Springlake. Our findings regarding some of the mysteries will be revealed during some of our future “Lunch & Learn” programs.

We also recently acquired 13 letters from Elizabeth “Bebe” Wolfe, the daughter of DAC artists Karl and Mildred Wolfe. Some of the letters written by Kelly Fitzpatrick to Mildred Nungester Wolfe are handwritten while others were created using Fitzpatrick’s typewriter. These letters, along with many of the other letters in the DAC Foundation archives, offer a very unique and personal glimpse into the hearts, minds, and souls of the Dixie Art Colonists.

Below is a quote from Fitzpatrick’s letter to Mildred Nungester dated May 2, 1942.

“You ask ‘HOW IMPORTANT IS ART’–well, the answer is easy. IT IS THE MOST IMPORTANT THING IN LIFE, to me………For ART, I have given up a self-satisfied comfortable, useful life–without Wife and Children–with debt, leaky roofs, ragged clothes—and a thousand evils that should make me ashamed and miserable–BUT DO NOT!–HAPPY, rather, in that I feel that I am doing what I was created FOR and not bucking the game…ART is RELIGION–or the prostitution of one’s Soul….That is the reason we are always tempted to sell out for cash and make a business–art (with a little A).”

One of the more interesting newspaper articles dated March 7, 1940, tells the story of a boy that not once but twice got separated from his parents at the 1904 World’s Fair in St. Louis. It just so happens that this young lad was Wetumpka’s, Kelly Fitzpatrick. Both times Fitzpatrick was found by his parents gazing at paintings hanging in the art exhibition. As his parents dragged him away, he told them, “If I could paint a picture good enough to be at a World’s Fair, I would be the happiest boy in the world.” It took 35 years for that to happen, but in 1939 and 1940 Fitzpatrick’s work was included in an art exhibition at the World’s Fair held in New York City. The sketch shown above from the DAC Foundation archives is a study sketch for Fitzpatrick’s oil painting titled Beeline Pottery displayed at the 1939 World’s Fair.

Join us as we continue to piece together this fascinating part of our Southern history.

Your ticket for the: Reconstructing and preserving the past, one piece at a time.

Reconstructing and preserving the past, one piece at a time.