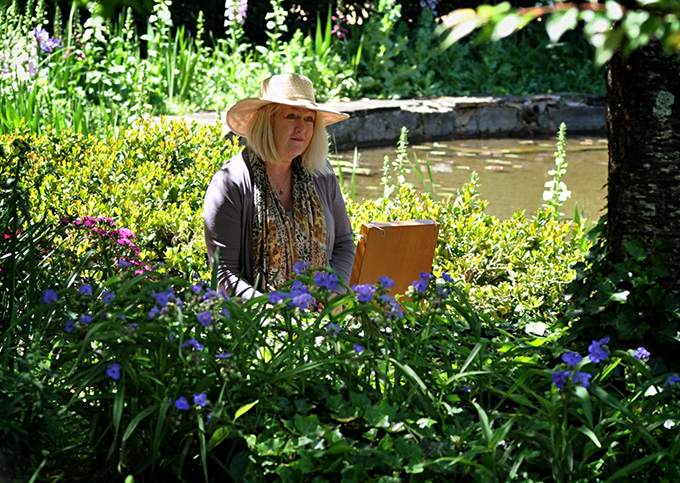 John Kelly Fitzpatrick's legacy lives on at Nobles Ferry and other sites frequented by the Dixie Art Colonists.

CAROL BARKSDALE: Barksdale is an award-winning artist inspired and intrigued by travel. She remembers learning to draw at the age of four from her mother, who was also an accomplished artist.  The family lived all over the world, including such places as Germany, Norway and the Philippines. Barksdale's favorite place of all was Rome, Italy, where her family lived while she was in high school.  Barksdale graduated from Marymount International, a private school in Rome, prior to returning to the United States where she attended and graduated from the University of Alabama in 1978 with a Bachelor of Fine Arts Degree.

Barksdale adopted Wetumpka, Alabama as her hometown, where she spent over 25 years teaching art in the Elmore County Public School System.  Barksdale currently paints murals in the schools around Elmore County.  Sharing her love of art has always been important to her. She still teaches private art lessons. Barksdale has been a longtime member of the Elmore County Art Guild and has served as both president and vice-president of the guild. She is represented in Montgomery, Alabama by Gallery One Fine Art and has been featured at the University of Alabama in a one-woman retrospective show and numerous Gallery One shows.  The University of Alabama also has one of Barksdale’s hand-lettered and hand-painted single-edition books, “The Preface to the Canterbury Tales” by Geoffrey Chaucer, in the rare books section of the library.

Barksdale's paintings can be found in many public and private collections, including the Energen Corporation, Alabama Power Company and Auburn University’s Cary Center, the home of the Auburn Women's Philanthropy Board. Carol has been commissioned by the cities of Montgomery, Wetumpka and Tallassee to create paintings celebrating the cities’ architectural interests.

Barksdale says of her work: “I want to give the viewers a sense of peace, calm and beauty in whatever scenes I depict. It is my desire that the sense of light, the colors and the harmony within the painting all draw the viewer into a calm and reflective place.”

For more information about Carol Barksdale and to see her work, visit CarolBarksdale.com

Your ticket for the: River Region Artist Carol Barksdale