September 9, 2016
No comments yet
From the Archives, News 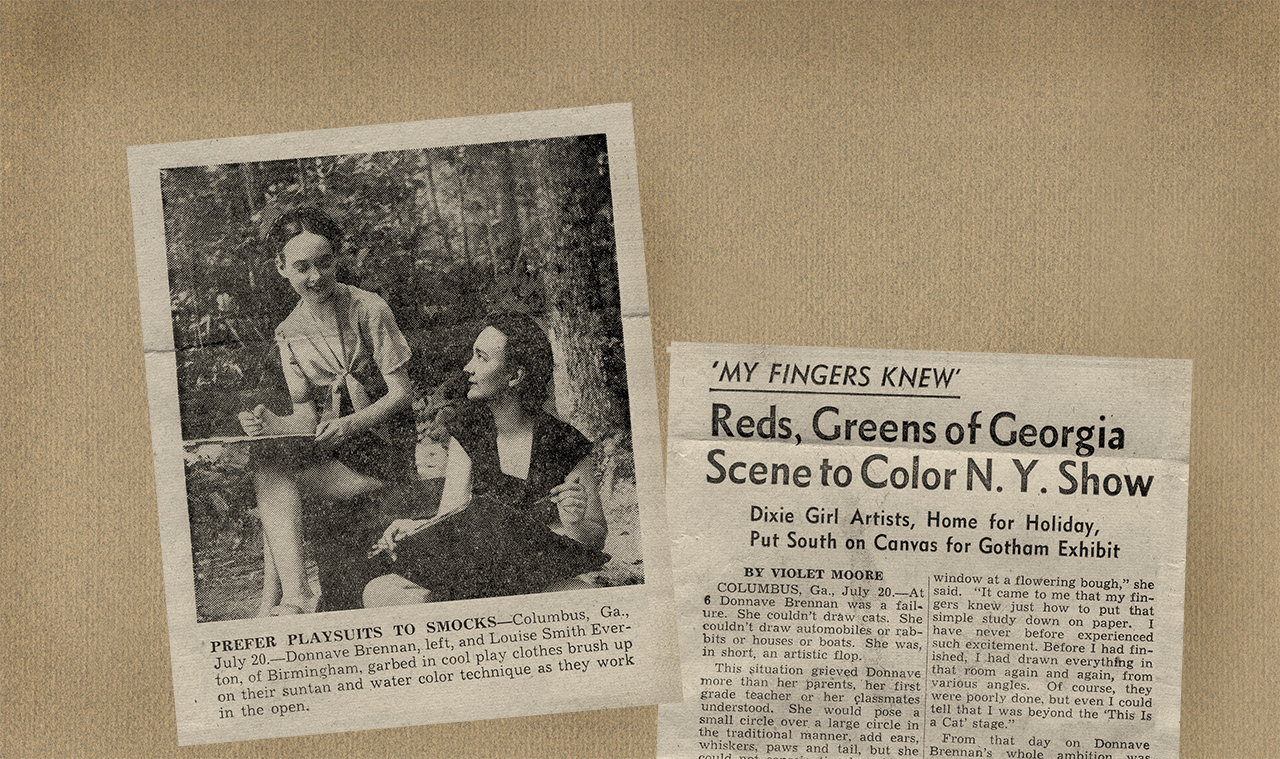 Dixie Girl Artists, Home for Holiday, Put South on Canvas for Gotham Exhibit:  At six Donnave Brennan was a failure. She couldn’t draw cats. She couldn’t draw automobiles or rabbits or houses or boats. She was, in short, an artistic flop.

This situation grieved Dannave more than her parents, her first-grade teacher or her classmates understood. She would pose a small circle over a large circle in the traditional manner, add ears, whiskers, paws and tail, but she counld not conscientiously print at the bottom of her paper, “This is a Cat.”

Today Dannave Brennan  (Lindsey), still a girl, still tiny and dark-haired and intense, is a commercial illustrator with Fawcett Publications in New York City, and never relaxing in her ambition to improve her marked talent, is studying nights at the Art Students’ League in the metropolis.

Home for a visit and to work on a group of oils and watercolors from which a selection is to be made for a one-man show at the Studio Guild Gallery in New York, Donnave, who pronounces her unusual name Donna-V, remembers, how she first discovered that her unorthodox approach to a grammar school artwork was evidence, not of ineptitude, but of clearly defined and original talent.

This Was not Cat: “I was in my bedroom recovering from measles or some such childish illness sitting on my bed with my knees drawn up underneath my chin, looking our my window at a flowering bough,” she said. “It came to me that my fingers knew just how to put that simple study down on paper. I have never before experienced such excitement. Before I had finished, I had drawn everything in that room again and again, from various angles. Of course, they were poorly done, but even I could tell that I was beyond the “This is a Cat stage.”

From that day on Dannave Brennan’s whole ambition was centered upon being an artist. Before going to New York in 1943, she studied under instructors at the Alabama Polytechnic Institute and the University of Alabama. Her parents, Mr. and Mrs. Cyril Brennan, now also live in New York.

Tiny as Donnave is, she once undertook to paint a farm life mural on the side of a barn, and still loves mural work. she also likes flower studies and portraiture, and, her first visit home in two years coinciding with peach and fig ripening time, she works absorbedly with a bowl of fresh fruit at her elbow, adding a highlight to the petal of a sunflower or altering the arch of an eyebrow.

Louise Smith Everton of Birmingham, close friend and fellow artist, is with Donnave, and is hard at work on studies for her own show, which will be held in the same gallery as Donnave’s. The wife of Captain Edgar R. Everton and mother of a two-year old daughter, Lousie was one of five students at the Arts Students’ League last year to be awarded nine months’ free tuition. She is a graduate of Birmingham Southern College and also attended the University.

During the past week, Donnave and Lousie have amused themselves doing oil portraits of each other in the informal garb they wore at the rustic art colony near Deatsville, Ala. They both Laughingly agreed that even artists prefer “pretty” pictures of themselves, and generally send glamour photographs to husbands and gentleman friends. Not “arty” in any sense of the word, the two girls own excellent appetites, abounding good health and a completely normal interest in books, movies, music, and clothes.  They rarely wear smocks, preferring play suits.

Both girls feel that the supply of pictures and paintable subject matter in Georgia and Alabama is inexhaustible. Thier own shows will be full of red hills, green pines and oaks, zinnias, camellias, country stores and churches, children, rivers and sunshine.

Your ticket for the: Dixie Girls: Donnave & Louise