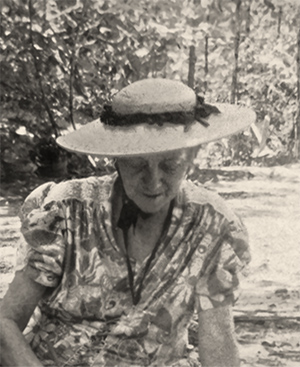 American Painter and Printmaker, Educator, and Advocate of Women's Rights and Civil Rights

Goldthwaite was born in Montgomery, AL on June 28, 1869. She was the daughter of Capt. Richard Wallach Goldthwaite and his wife Lucy Boyd Armistead. Sometime after 1872, the family relocated to Dallas, TX. Upon the death of her parents, at the age of 15, Goldthwaite and her two sisters returned to Montgomery to be cared for by various family members. She never married, but was engaged. Legends suggest that her fiancé was killed in a duel.

While visiting her in Montgomery, her uncle Henry Goldthwaite was so impressed by her drawing and painting skills that he offered to support her financially for up to ten years if she relocated to New York City to study art. She soon enrolled at the National Academy of Design where she studied etching with Charles Mielatz and painting with Walter Shirlaw. In 1906, Anne Goldthwaite traveled to Paris to explore her interest in the early modern painting styles of Fauvism and Cubism. While sketching one day in Luxembourg Gardens she met American writer Gertrude Stein. Stein invited Goldthwaite to visit her apartment, yet she hesitated due to Stein's shabby appearance. After visiting Stien's home, Goldthwaite was immediately impressed by the extensive collection of contemporary paintings which hung on the walls of Stein's apartment. The chance meeting of one of the most influential pre-war and avant-garde persons of the time provided Goldthwaite with an opportunity to join the art circle of Henri Matisse and Pablo Picasso. Goldthwaite later said, "Fate gave me several years in Paris at the most exciting time: during the great reconstruction from art to modern art." After drifting from studio to studio in an attempt to find the right teacher, she joined a small group of young artists called Academie Moderne.  They held an exhibition each spring and their work was periodically critiqued by Charles Guerin, a disciple of Cezanne. In 1913, Goldthwaite's oil painting, The House on the Hill was included in the famed Armory Show in New York, NY.  At the 1913 Armory Show, her work was displayed with many of the world's most renowned artists, including Mary Cassatt, Paul Cézanne, Edgar Degas, Vincent van Gogh, Robert Henri, Edward Hopper, Henri Matisse, Claude Monet, Pablo Picasso, and Pierre-Auguste Renoir.

From 1922 to 1944, Goldthwaite taught at the Art Students League and worked on private portrait commissions. During the summers, she would return to Montgomery, which remained a rich source for her works of genre scenes of the south. Goldthwaite served as president of the New York Society of Women Artists from 1937-1938. Goldthwaite passed away on January 29, 1944, in New York City, NY at the age of 74. She was buried in Oakwood Cemetery in Montgomery, AL.

Your ticket for the: Anne Wilson Goldthwaite