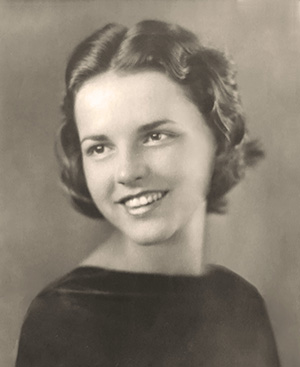 Amanda Middleton Moon (Erisman) was born on November 7, 1910, in Birmingham, Alabama; however, she grew up in Montgomery, Alabama. She was the daughter of Colonel Hartley Allen Moon, Adjutant General of Alabama, and Mary Middleton Moon.

In 1928, after graduating from boarding school at Arlington Hall in Virginia, Amanda returned to Montgomery, where she graduated from Huntingdon College with a Bachelor’s Degree in Fine Arts in 1934.  She began studying with Kelly Fitzpatrick and Warree LeBron at the Dixie Art Colony in the mid-1930s and continued her studies at the colony into the early 1940s.

In 1936, Amanda married Percival Heistand Erisman, Jr. and relocated to the Washington DC area, where she lived for 72 years, and she raised her two children.

Through the years, she continued her work in watercolors and began the pursuit of tole painting, producing decorative trays that she often gave away as gifts. She also participated in numerous art classes, workshops and art related excursions both locally and internationally.

Amanda was an active volunteer in her community and a member of the Daughters of the American Revolution.  She served as a Congressional Page, and a motor corps driver for the American National Red Cross DC Citizens Defense Corps during WWII, transporting disabled veterans to Walter Reed and St. Elizabeth’s Hospitals.  She also served as a Red Cross Nurse’s Aide at George Washington University Hospital.

Through the years, she remained close friends with several of the colonists, including Kelly Fitzpatrick, Warree LeBron, and Mildred Nungester Wolfe. Amanda passed away on September 22, 2010, just six weeks shy of her 100th birthday. Her family believes that her longevity can be attributed to her lifelong love of swimming.

Your ticket for the: Amanda Moon Erisman